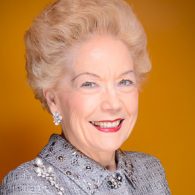 Susan Alberti AC is one of Australia’s pre-eminent philanthropists, having donated millions of dollars to medical research and other charitable causes over her successful business career.

Susan was featured on ABC Australia Story ‘A League of Their Own’ in 2016.
In 2017, Richard Goyder AO launched Susan’s biography, ‘The Footy Lady’ and Susan was crowned 2017 Melburnian of the Year. She was presented with the

Leadership Award the AIS Sport Performance Awards for her vision and influence in driving the launch of the inaugural AFL Women’s competition.
In 2018 Susan received the InStyle and Audi Women of Style 2018 “The Irrepressible Force” Award and the 2018 Victorian of the Year Award.
In 2019 Susan was nominated in the “50 Most Influential Aussie Women in Sport” in the Herald Sun Sunday edition and was awarded the prestigious 2018 Victorian State Government Outstanding Contribution to Sport Award.